The Wild Pacific Trail in Ucluelet, Vancouver Island is one of the most scenic coastal hikes in the world. It’s definitely worth the long travel time to get to this remote area. 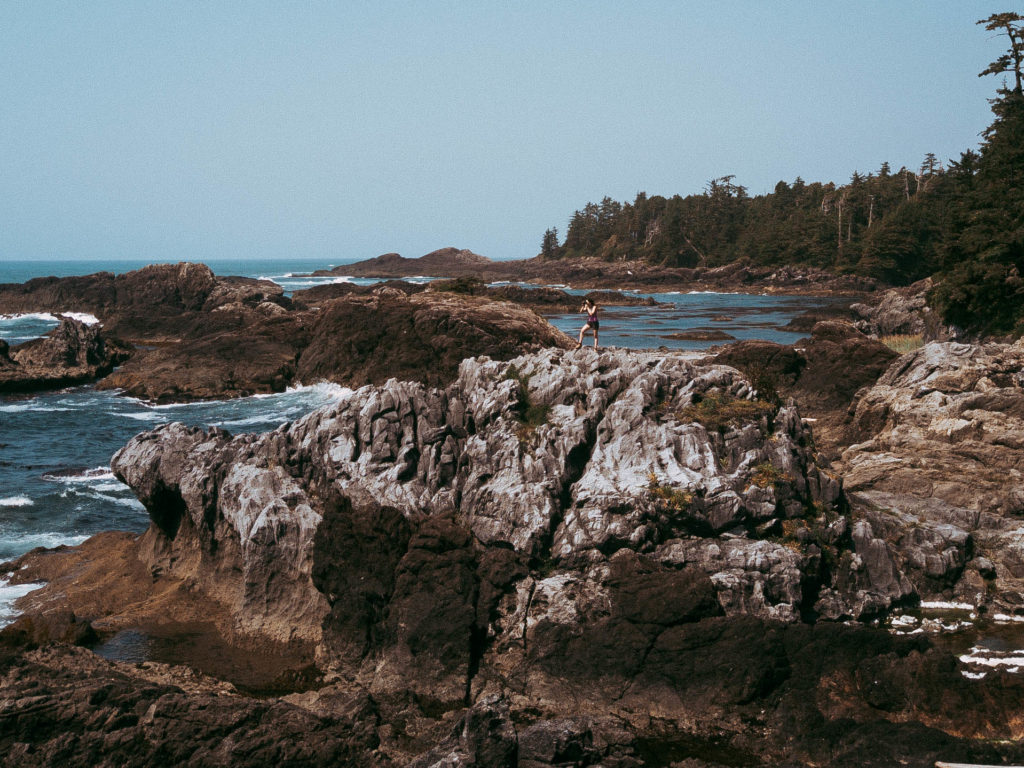 The Wild Pacific Trail is hands down among the coolest coastal hikes in North America. It’s right up there with the Kalalau trail in Kauai, or hiking along the rugged ocean cliffs of Ecola State Park in Oregon. The hike itself isn’t particularly rugged, but you’d never guess that by the views you get. Aptly named, The Wild Pacific Trail meanders along a wild and scenic stretch of coastline in Ucluelet, BC, on Vancouver Island. Each little twist and turn along the coast reveals a new perspective of the gorgeous coastline. Conveniently placed benches frequently invite you to take a seat and soak up the scenery. We only hiked a few kilometers each way, but it took us hours because we kept stopping to take in the views.

Related: Chesterman Beach sunset in Tofino with a drone

On our way back, we stopped to take out the drone and get a bird’s eye view of The Wild Pacific Trail. No way I’m ever going to get tired of seeing the landscape from this perspective. We zipped it up a few hundred feet and watched our immediate surroundings give way to an undulating coastline of rocky outcroppings and foamy waves. These photos give you an idea of the route the Wild Pacific Trail takes along the coastline. There really isn’t a dull moment anywhere on this hike.

MORE of the Wild Pacific Trail AT TERRACE BEACH

Ucluelet is situated on a little peninsula that juts out into the Pacific Ocean, so there’s a lot of coastline packed into this small town. After hiking the Wild Pacific Trail, we went to nearby Terrace Beach. Terrace Beach is small in comparison to the expansive beaches of Tofino, the surf town to the north. But the little beach makes up for it with its picturesque setting. In general, the beaches in Ucluelet are more rocky and rugged than the beaches in Tofino, adding more variety to the view. At low tide, it’s also a great spot to walk around and look for sea creatures.After enjoying a beer on the coast, we walked out along the edge of the cove to explore some tide pools. Mission accomplished when we spotted a star fish, woo! Aiko loved romping around the tide pools too. That little buddy loves to explore. He handled the slippery coastal rocks surprisingly well, though he’s no stranger to rock scrambling. We had fun taking some photos along the way, and we even managed to have a little photo shoot with ourselves being cute n stuff. After hiking lots of coastline on the Wild Pacific Trail, it was fun to take some time exploring just a small section of it.

Down on the tip of the Ucluelet peninsula sits Amphitrite Lighthouse. The Wild Pacific Trail loops around the peninsula here, hugging the coastline and taking you right by the lighthouse. Since the coastline by the lighthouse basically faces east, we decided to come here for sunrise. However, due to the misty morning air (which I’m pretty sure is the only kind of morning air here), there was really no “sunrise.” But that didn’t matter. It was still a magical time to explore this area.

We had the trail to ourself all morning, which made the area feel even more pristine and remote. The lighthouse was on and we watched fishing boats head out into the ocean for the day. We also fired up the drone again. This time, we really tested its limits and flew it way out over the choppy seas. We chased down some boats and got incredible views of the lighthouse perched on the rocky shore. This drone is seriously insane and begs to have its limits tested. With a top speed of 40mph, max height of 800 meters, and a range of 7 kilometers, how could you not?! Gabi is considerably more cautious than me, however. And although I flew it back to safety on this particular morning, two later I would crash it into a cliff. Oops. There’s probably an ideal balance between my urge to push the drone’s limits and Gabi’s precaution. Good thing we had insurance.

Anyways, we got some of our favorite photos from the trip this morning. This section of the Wild Pacific Trail was every bit as epic as the one we had walked the day before. Maybe more. If you ever get a chance to make the long journey out here, we highly recommend it.