La Push elopement scouting on the Washington coast. It’s a beautiful beach with rugged haystack rocks and a perfect place for an adventure elopement. 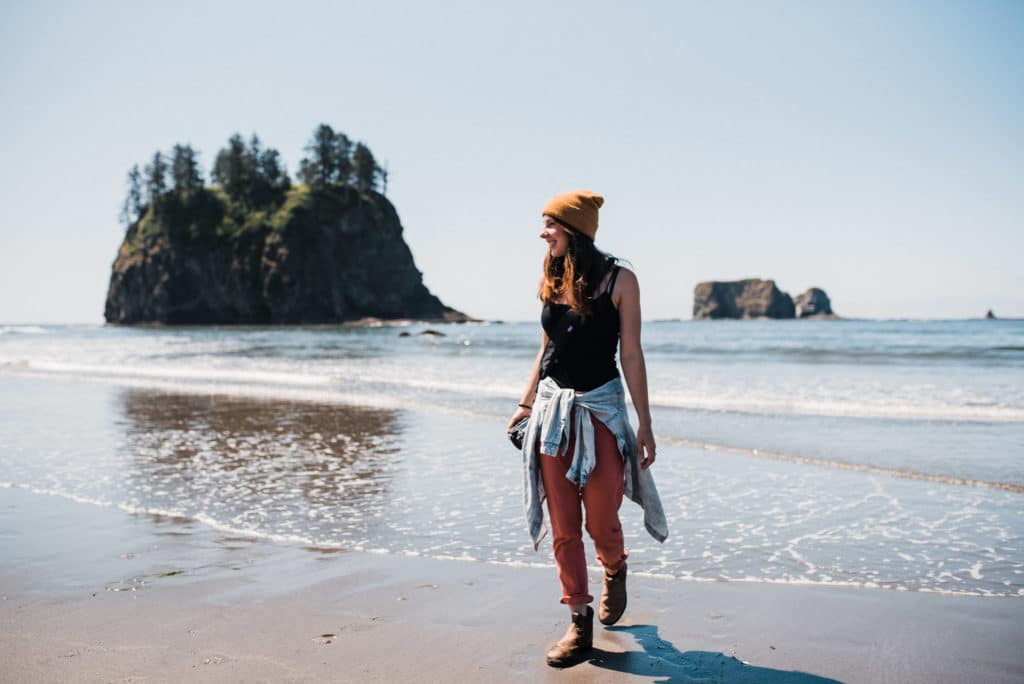 We didn’t visit La Push at the most picturesque time of day (sunset), but it left us in awe nonetheless. We had just been to Ruby Beach to scout the night before, and at that one we did catch sunset. So we can imagine what things would have looked like soaked in that warm, red glow of the setting sun.

La Push is located about an hour’s drive north of Ruby Beach, towards the upper left corner of the Olympic Peninsula. It’s not quite all the way up there on the tip, but it certainly feels pretty remote. The town of La Push is very small. Not much to do there and not much to look at. But you don’t come all the way out to La Push for the city. You come for the beaches.

Yes, beaches, plural. The coastline near La Push is part of the Olympic National Wilderness and is separated into three beaches. They’re creatively named First, Second, and Third Beach. We didn’t check out Third Beach at all, but we did scope First and Second. The pictures in this post are all from Second Beach, which is definitely superior to First. Not that First isn’t gorgeous too, there’s just more variety and seclusion at Second.

After a pleasant 10-minute or so hike through old-growth forest, you pop out on Second Beach. Driftwood litters the beach and huge rocky islands grow out of the ocean. These PNW coasts really know how to put on a show. The keyhole in one section of rock was particularly cool, and I can imagine the sun setting perfectly aligned through it. Judging by the location of it, this just might happen at certain times in the summer, when the sun is setting farther to the north. Next time we’re at Second Beach, we’ll definitely be staying for the show.

The Foxes are Brandon and Gabi Fox, an adventurous husband and wife elopement and wedding photography team living full-time in their DIY renovated 1972 Airstream. They are loosely based in the Pacific Northwest, but travel for work and play throughout the western states. Their work is best described as candid photography that captures couples as they are, where they are, blending images of love and natural beauty in the great outdoors.

We don’t share reviews we get from our couples n

Throw back to the very first elopement we ever sho

We shoot quite a few elopements out in these mount

You wanna know the trick to creating the best phot

After all these years of traveling to the most stu

I remember the first time we saw this place with o

The anticipation… you’ve imagined this moment

Jodie and May traveled all the way from Hong Kong