There are gems scattered up and down the whole Oregon coastline, but Hug Point is particularly spectacular. Hug Point is kind of like taking a bunch of natural features that are stunning in their own right, and then sandwiching them all together into one mega landscape. You’ve got a cave, a waterfall, a mountain stream, boulders, and towering evergreens, all on a beach with the Pacific ocean stretching beyond the horizon. You really can’t go wrong with a Hug Point elopement.

Our first time visiting the Oregon coast was only the day before we came here. We had been out to Cape Kiwanda for an adventure session with a couple whose wedding we had just photographed at Cathedral Park in Portland. Cape Kiwanda set high expectations for the rest of the Oregon coast, and Hug Point totally delivered. Hug Point offers a very different experience, but it’s equally breathtaking. 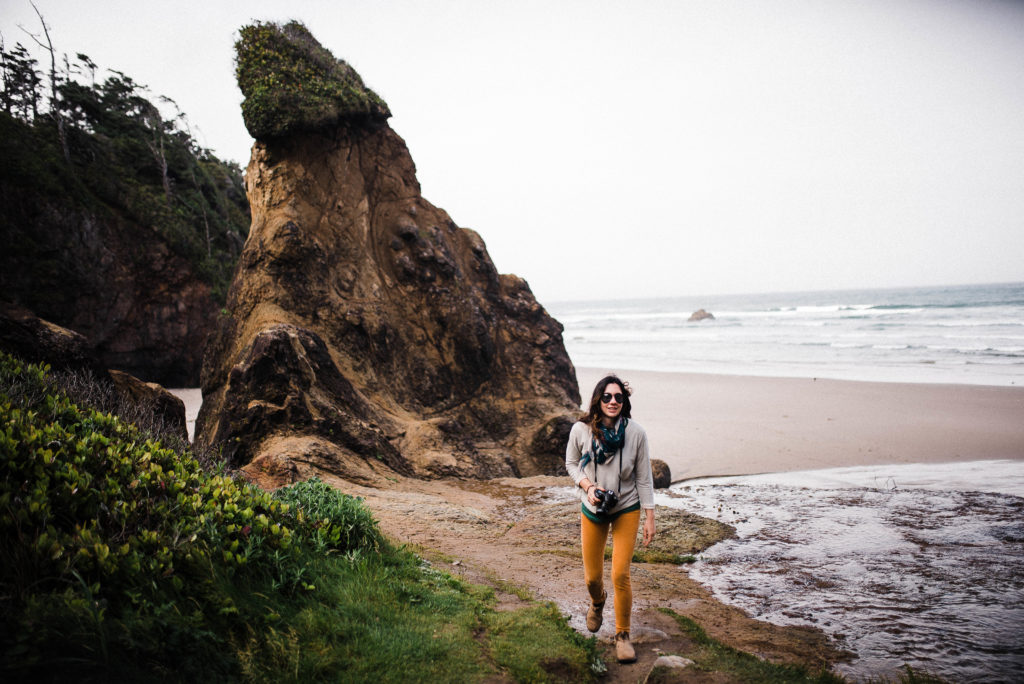 Gotta say, Portland couples have it pretty good when it comes to options for drop dead gorgeous outdoor weddings and elopements. Case in point, Hug Point. But then again, so do all couples in the Pacific Northwest. It’s just kinda like that up here – insanely beautiful. Really hoping we’ll be back to do an elopement or an adventure shoot here someday. (wink wink, nudge nudge Portland/Seattle/PNW couples 😉

On the morning we went to Hug Point, we woke up to a dense fog engulfing the Oregon coast. It seems like every morning is probably like that. Definitely adds to the mystique of the area’s rugged shores and towering evergreens. We got to the beach around mid-morning, just as the clouds were beginning to think about lifting. We ventured down to the sandy shores and began exploring. It didn’t take long to find Hug Point.

After ogling Hug Point for a good while, we set back off down the coast to explore the rest of the area. By that I mean we ran down the beach like giddy children, spinning in circles, climbing on wet boulders, and chasing seagulls with our cameras. Beaches are just plain fun, even when it’s cool and cloudy. Actually, especially when it’s cool and cloudy. I think we’ll do okay up here in the PNW.

This post on Vancouver Island’s Wild Pacific Trail in Ucluelet

Want to have a Hug Point Elopement? You know who to call.

We got the developed 8mm film back from this day r

So much planning and logistics went into this elop

The hardest thing about this job is saying goodbye

Purple Haze would have been a fitting first dance

So much we’re obsessed with about this Rainier e

It’s hard to top the kind of carefree stoke and

Strolling along a sea of glaciers, gazing into cry