Cape Kiwanda has been high on the list of “cool places we NEED to photograph in the PNW” since we first set eyes on it. So when Kyle and Victoria told us they wanted to head to Pacific City the day after their Portland wedding at Cathedral Park for an elopement style adventure shoot, we were PSYCHED. Cape Kiwanda is a photographer’s paradise, with waves crashing dramatically into rugged sea cliffs that jut out into the Pacific Ocean. Then there’s the massive haystack rock that lurks just off the coast, adding a whole ‘nuther level of epicness to the scene. It doesn’t get much more epic than this.

The haystack at Cape Kiwanda is the tallest on the whole Oregon coast, and the fourth tallest sea stack in the world, rising 327 feet above the sea (thanks wiki). I should note, this isn’t to be confused with Haystack Rock in Cannon Beach (another spot on our epic PNW photography list). “Haystack” is just a generic term for these rocks, and then they confusingly decided to dub one of them the Haystack. Anyways, Cannon Beach can claim the official Haystack award for all we care, because Cape Kiwanda has so much more going on. 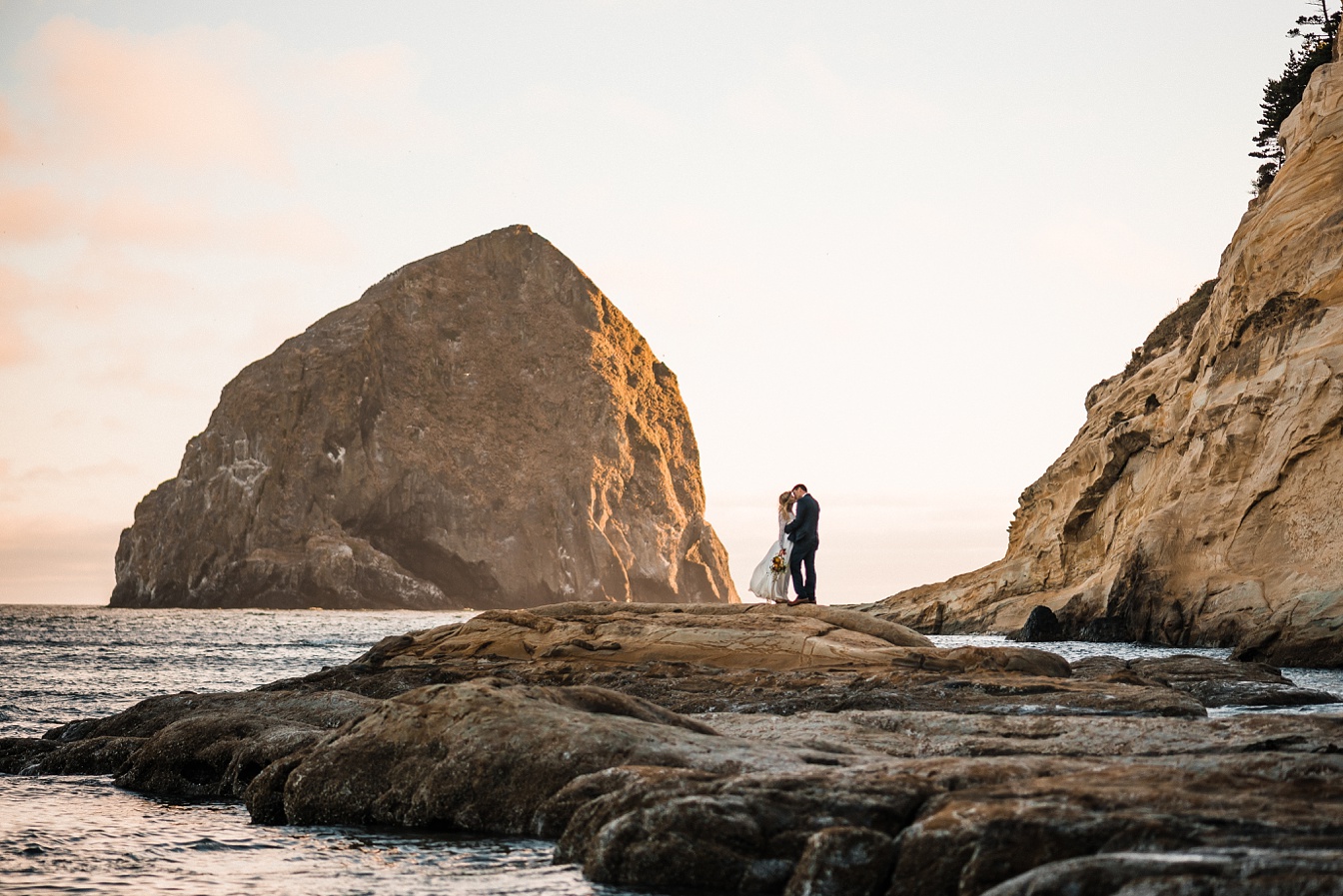 As any good adventure session should, we started things out with a beer with Kyle and Victoria at Pelican Brewery while we waited for sunset. Side note – Pelican has got to have one of the best locations of any brewery we’ve ever been to – right on the beach, about as close as you can get without touching high tide. And good beer too! After sipping some deliciously hoppy suds, they changed into their wedding clothes and we ventured out onto the Cape for a dream photography session.

As adventurous outdoor wedding photographers, we get to photograph some spectacular locations. Well, we can easily say that this place at least ranks in the top three most epic landscapes we’ve ever seen. The session started by climbing a big sand dune, from which point we began our adventure out onto the cape. Gabi and I had already been out earlier to do some scouting, and had picked out some of the best locations.

We went up and over a grassy, windswept hill and emerged with sweeping views of the Haystack to our left, and the rocky coast to our right. We snapped some photos there, and then Kyle and Victoria braved a steep and rather wet descent to a rocky outcropping down by the water. We got some of our favorite images here, with Kyle and Victoria sharing intimate moments in the foreground, while Cape Kiwanda put on a show in the back.

We ended the adventure session all the way out at the tip of Cape Kiwanda, with a clear shot of the haystack towering directly in front of us. It was a bit too cloudy to really get much of a sunset, but the evening light, ebbing tide, and circling flocks of seagulls made for an enchanting ambiance nonetheless. No complaints here. Finally, we hiked back down to the beach and snapped a few last shots of Kyle and Victoria in the fading evening light. The summer days are looooong up here! It was close to 10pm by the time we said our goodbyes.

Check out our post on Hug Point, another cool Oregon Coast elopement location.

We’ll be back, Cape Kiwanda.

Cape Kiwanda is no stranger to wedding photographers and adventure sessions. There are probably at least a couple sessions out there every week. But it’s cool to look at all the pictures and see different photographer’s takes on it, the angles and spots they chose, what the light looked like that day, how they edited the photos, etc. With a place like this, you can always find a new way to capture it, and the landscape is always subtly changing. Kiwanda is an Oregon gem, and further confirms that moving (at least semi-permanently) to the PNW was the right choice.

Gabi and I ended up spending the night on the coast, and slowly made our way back up to Seattle, checking out the the rest of the northern Oregon coast. Man, Cape Kiwanda is just a fraction of the epic scenery that coast contains. On our way back, we stopped a little further up the coast to do some elopement location scouting at Hug Point, and we can’t wait to go back for an elopement or adventure shoot there. So many possibilities! Oregon coast, we’ll definitely be seeing a lot of you :-*

We got the developed 8mm film back from this day r

So much planning and logistics went into this elop

The hardest thing about this job is saying goodbye

Purple Haze would have been a fitting first dance

So much we’re obsessed with about this Rainier e

It’s hard to top the kind of carefree stoke and

Strolling along a sea of glaciers, gazing into cry